What Would You Do…?

What would you do if you had absolutely nothing to get started but your life depended upon you launching a new product or starting a new business?

I recently watched a wonderful movie called “The Boy Who Harnessed The Wind”.

It’s based on the true story of William Kamkwamba, a teenager living in near-poverty, in early-2000s Malawi, amid political upheaval, societal crisis, drought and famine.

His farming village is left abandoned by the government as people are starving to death around him.

His own family has run out of food.

The science-obsessed Kamkwamba saves his village from the drought by building a windmill bringing electricity and, more importantly, water.

No one believed in him as no one understood what he wanted to do.

He had to scavenge every component from rubbish tips and then get his father’s main asset, his push bike, and cut it up to make the windmill.

But in his own words, he said, “I thought I could do it, so I tried and it worked.”

We have so much, yet we use all sorts of scarcity excuses for not getting things done … the time’s not right, I don’t have the right staff.

What would you do if you didn’t even have enough resources to launch that new product … but your life depended on you doing it anyway? 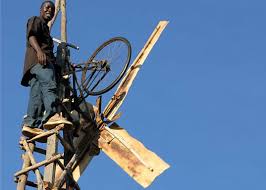